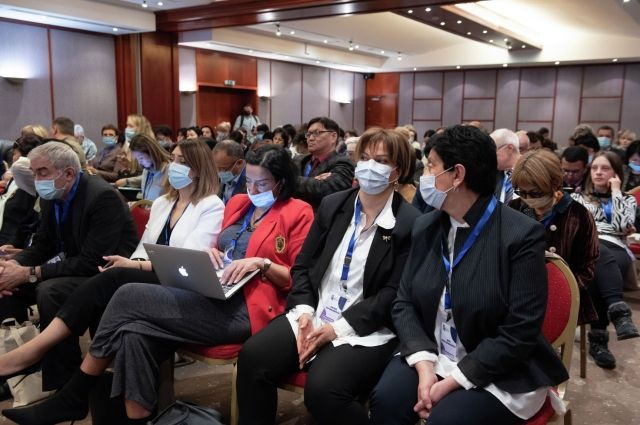 Almaty hosted the 2nd International Congress on Language Policy of the CIS Countries, bringing together 150 linguists from Russia, Kazakhstan, Azerbaijan, Armenia, Belarus, Georgia, Kyrgyzstan, Moldova, Tajikistan, Uzbekistan and Ukraine. For three days, congress participants discussed language policy in the post-Soviet space, citing Kazakhstan as an example as a country where “balanced bilingualism” has been preserved. It also became known during the forum that the CIS executive committee plans to declare 2023 the Year of the Russian Language in the Commonwealth. Arguments and facts prepared an overview of the presentations of the experts. & nbsp;

“The bond of the civilized space of the CIS”

The choice of Kazakhstan as the hospitable host country of the International Congress of Languages ​​is logical and fair. According to the head of Rossotrudnichestvo's office in the Republic of Kazakhstan, Alexei Koropchenko, everyone is well aware of the achievements of the largest republic in Central Asia in the preservation of interethnic and interfaith peace, the guarantee of which is language policy . Further, the diplomat noted, the distinctive school of Russian studies formed in Kazakhstan enjoys well-deserved authority and recognition around the world.

Of course, in the congress reports and discussions, the emphasis was placed on preserving the Russian language as a gluing factor in the development of the Commonwealth of Independent States. Two weeks ago the President of Russia Vladimir Putin , speaking to the Council of Heads of State & ndash; members of the Commonwealth, called the Russian language 'the bond of the civilized space of the CIS'. In turn, the President of Kazakhstan Kassym-Zhomart Tokayev directly urged schoolchildren to study the Russian language. Speaking to the Council of the People's Assembly of Kazakhstan in October, he said: “The graduates of our schools should be integrated into Kazakh society. They must be competitive and, for that, they must know both the official language and their own national language. And it is desirable to be fluent in Russian. & # 39; & # 39;

Despite attempts by some forces to create a language-based split in the post-Soviet space countries, the Russian language, as before, remains in demand in all spheres of life in post-Soviet society. Soviet, he is a factor of union of peoples, including in Kazakhstan. The Russian Consul General in Almaty Yevgeny Bobrov addressed the congress participants with these words, noting that the senior leadership of Kazakhstan has great merit in preserving the Russian language.

“ We know the opinion of a senior executive & ndash; President of Kazakhstan in relation to the Russian language, in relation to other ethnic groups, other languages. It is perfectly tuned to strengthen, consolidate the company, & ndash; continued the Russian diplomat. & ndash; 95% of all ethnic groups in Kazakhstan are fluent in Russian to one degree or another. When we say we have to learn languages, we are saying we have to learn culture. The fact that we have a common history, a common culture & ndash; it is our property, it is our wealth, which we must preserve and strengthen for the benefit of the prosperity of our countries. Language & ndash; it's communicating. We must be able to negotiate with each other to achieve big goals. & # 39; & # 39;

One of the main speakers of the Congress, Vice-Rector for Sciences of V. Pushkin Mikhail Osadchiy . Evaluating Kazakhstan's language policy, the professor called it “quite successful.” “

“ Based on the documents from the Republic of Kazakhstan, I can say that your language policy is quite successful, since balanced bilingualism has been preserved in your country. Balanced bilingualism & ndash; the fact that in your country it is understood that you have not lost the Russian language, although many, probably, after gaining independence, recommended doing so. You have realized that this is a great asset, your personal future and the future of your children and grandchildren ', & ndash; says the expert.

Already in conversation with the correspondent of the AiF; Professor Osadchiy continued his reflection: “ In Kazakhstan at one point they realized how much fiction, scientific and educational literature in Russian and it is inappropriate to abandon this national heritage of information. And they did well! They did not deprive themselves of a great competitive advantage. ''

The idea of ​​a colleague was supplemented by the president of the Kazakh Association of Teachers of Russian Language and Literature Eleonora Suleimenova … According to her, the “ Soviet terrain '' consolidating all ethnic groups in a multinational country with the help of one Russian language always pays off. “ Kazakhstan is on the eve of the 30th anniversary of Independence, and it is only natural that our country makes an effort to assess the effectiveness of its language policy. Today, the Russian language remains a legacy, a resource that each CIS state manages in its own way & # 39; & # 39; & ndash; Suleimenova said, adding that the active language processes taking place in the CIS require special attention and that an adequate response to the various changes should be developed through joint efforts.

Professor of the Department of Russian Language and Literature of the Kazakh National Pedagogical University. Abay Manat Muatayeva said that today there is a positive trend in the recruitment of Russian students. “ This year alone, 200 people have entered our Faculty of Russian Language and Literature, & ndash; specified the philologist. & ndash; And so, I repeat, year after year there are more and more applicants. A similar situation is seen in other major universities across the country teaching students in this specialty. “& Nbsp;

The Year of the Russian Language in the CIS

Important news was heard in Congress & ndash; 2023 will be declared the Year of the Russian Language in the CIS countries. The director of the Center for Studies on Language Policy and International Education of the State Institute of Russian Language, named after VI Pushkin Svetlana Kamysheva … “ The announcement by the CIS Executive Secretary Sergei Lebedev that the Executive Committee would declare 2023 the Year of the Russian Language in CIS countries was very important. And presidents of all countries have already given their consent to this & # 39; & # 39 ;, & ndash; says the expert. & ndash; At the end of the congress, we will prepare a resolution which will be sent to the executive committee of the CIS countries. We hope that the administrations of the Presidents of Commonwealth countries will use our recommendations on current language policy. & # 39; & # 39;

In his opinion, the II International Congress “ Linguistic Policy of the CIS Countries & # 39; & # 39; 100 percent successful. “It was incredibly interesting! & ndash; Svetlana Kamysheva said with emotion. & ndash; The point is that each CIS country has a unique linguistic situation, so it develops its own model of effective interaction of languages ​​and their functional distribution. And we scientists, of course, want to understand what this model is, how it works, and discuss the issues of multilingualism with experts. For this, literally the intellectual elite of our countries have come together. But the congress & ndash; these are not just scientific meetings. It is communication, communication and, of course, knowing a beautiful country. There was an amazing cultural program, an absolutely wonderful excursion around Almaty, a trip to the legendary Medeo & ndash; pride of Kazakhstan. Each participant left with vivid impressions. & # 39; & # 39; Linguists have a head start on the III International Congress on Language Policy, which is scheduled for 2023.