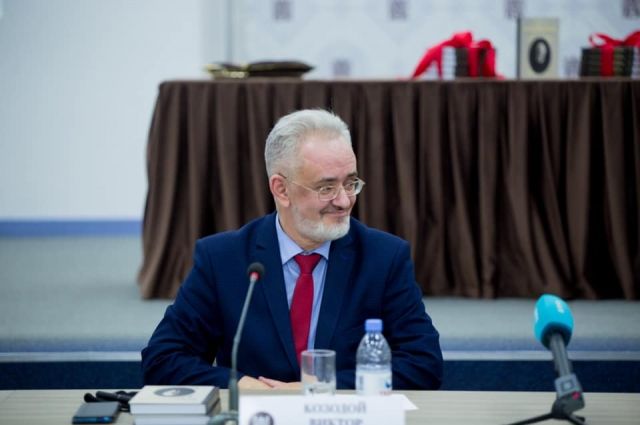 A presentation of the book by Russian scientist Viktor Kozodoy “ Alikhan Bukeikhanov: an & # 39; era & # 39; masculine takes place these days in Kazakhstan. & laquo; My book & ndash; a gift to Kazakhstan in honor of the glorious date of the 30th anniversary of independence & # 39 ;, & ndash; says the historian.

We are talking about the deputy of the First State Duma of 1906, who laid the foundation for the national independence of the Kazakh people. The point is that in 1917 on the ruins of the Russian Empire Bukeikhanov with like-minded people created the Autonomy of Alash (in memory of the mythical ancestor of the Kazakhs Alash, who united the ancient peoples of Central Asia), led by Alikhan Bukeikhanov. However, “ Alash-Orda '' lasted only three years and was liquidated by the Revolutionary Military Committee of Soviet Russia, and Bukeikhanov himself was subsequently shot down. In an interview with Arguments and Facts Doctor of Historical Sciences, Professor Viktor Kozodoy spoke about his work, the release of which falls on the 30th anniversary of the independence of the Republic of Kazakhstan (the same year , the Kazakhs celebrated the 155th birthday of Alikhan Bukeikhanov). & nbsp; 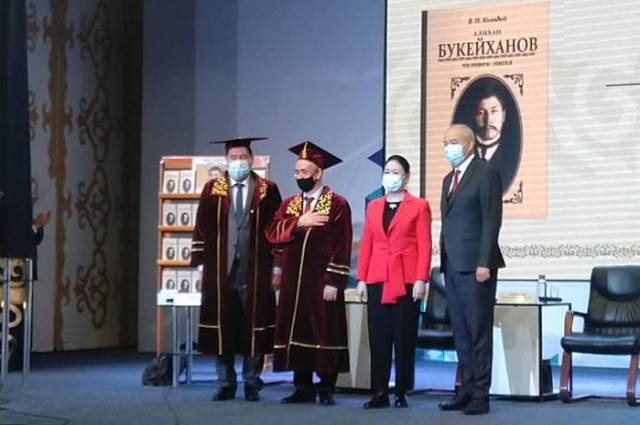 Viktor Kozodoy was awarded the title of Honorary Professor of the University. Bokeikhan. Photo from the archives of V. Kozodoy

& ndash; & nbsp; Viktor Ivanovich, what sparked your interest in Alikhan Bukeikhanov, what you call the 'era of man'?

& ndash; I have long dealt with the history of the October Revolution and the Civil War. I had planned to write a book about the situation in Siberia at that time. I myself am Siberian, and I was first interested in the figure of General Alexey Grishin-Almazov (one of the leaders of the white movement in Siberia, the founder of the so-called “ Siberian army '' in 1918. While gathering material on him in Pavlodar, where I was invited to lecture, I found information about the 'Alash-Orda' movement. and its leader & ndash; Alikhan Boukeikhanov. And I realized that to study the history of Siberia at that time, without a socio-political phenomenon like Alash, the picture would be incomplete. There was a desire to understand, to study everything thoroughly, and without the history of the leader of the “ Alash Horde '' was essential.

& ndash; & nbsp; What is your research approach?

& ndash; I view history through the life and activities of individuals, personalities. I made my previous work based on the biography of Alexander Ivanovich Guchkov , the greatest historical figure of the beginning of the 20th century. The same who accepted the abdication from the hands of Nicholas II in March 1917. So I already had the experience of writing such biographies, knowledge of the time. In general, everything coincided. While working at Pavlodar, I realized that there wasn't a single book about Alikhan Bukeikhanov in Russia. I considered this to be wrong and decided to fill this gap to some extent. For two years I worked hard to write a monograph, which I completed, and at the invitation of friends and colleagues which I now present in Kazakhstan. & Nbsp; 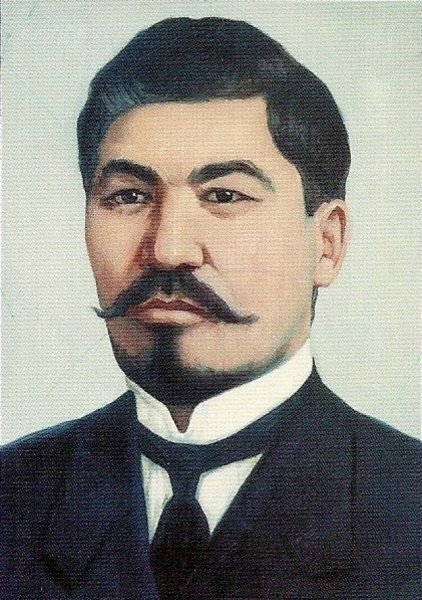 1906 Member of the State Duma Alikhan Bukeikhanov. Photo from the archives of V. Kozodoy

& ndash; Very bright, who serves as an example to build his life path, to be able to overcome difficulties, not to give up. He is the example of a leader born in the steppe, and through his diligence, hard work, awareness of his personal role as Chingizid, responsibility to people, he has Step by step acquired knowledge and skills that enabled him to become a leader in 1917. When I began to study the renewal of the traditions of the Kazakh state, the formation of the Horde “ Alash '' & # 39; & # 39 ;, then the Kyrgyz Autonomous Socialist Republic (a little later Kazakh) in 1920, I had a scientific research question & ndash; and why hundreds of peoples lived in the Russian Empire, and few were able to create and receive autonomy. Kazakhstan was in the foreground. Why did this happen? What contributed to this? I try to answer these questions in my monograph.

& ndash; & nbsp; Do you agree with the view that between Russia and Kazakhstan there are “white spots” in history, and they need to be investigated in order to take into account count the mutual mistakes of the past, to move forward together towards the future?

& ndash; Certainly white spots there are many in the history of any country, and there are many in the history of Russia. I begin my book with these words: “ Kazakhstan & nbsp; terra incognita, unknown land. & # 39; & # 39; At school, institute, we study the history of Ancient Greece, Ancient Rome, Medieval Europe, New England, New England a lot. America and pay very little attention to the history and lives of our closest neighbors. This is wrong and now sometimes we get negative traces. About Siberia, for example, some rulers say it was ice and desert, all life there only began with the arrival of Ermak. And they are trying to say that about Kazakhstan. It all comes from ignorance, ignorance. It is impossible to build good neighborly relations without knowing each other's history, culture, mindset. And I want to know the history of the people, where I have friends, comrades, colleagues, where my sister is buried in Nur-Sultan and will remain in the Kazakh land forever. The people of Kazakhstan & ndash; our good friends. And if you compete, then only in sport, science, mutually enriching, with full respect, recognition of independence, inviolability of borders.

& ndash; & nbsp; President of Kazakhstan Tokayev recently said that “history should be occupied by historians, not politicians.” Is the modern politicization of historical events bad?

& ndash; Definitely harmful. I totally agree with the words of the President of Kazakhstan. It is necessary to study historical documents, facts, and not fictions and myths. You should not be afraid of difficult questions, but, on the contrary, remove these questions by mutual study. & Nbsp; Popular science books should be published. For example, over the past couple of years I have popularized the personality of Bukeikhanov for the Russian reader. And for me, it is a big surprise that my book is presented so widely in Kazakhstan.

& ndash; & nbsp; In your opinion, what is the potential of Russia's cultural and historical community with Kazakhstan?

& ndash; It's more of a philosophical question. We have great potential for interaction. My job wouldn't have happened if it hadn't been for such cooperation. I have actively collaborated with professional historians from Kazakhstan, I am very grateful to the director of the Institute of History and Ethnology named after A. Ch. Valikhanova Ziyabek Kabouldinov … I asked him to help with the archive work, then he kindly agreed to read the text of my book before printing it. I am very grateful to my colleagues from the archives of Semey, Pavlodar, Almaty. Lots of people, who I'm not familiar with, have sent me links to literature, electronic versions of documents I'm interested in. I felt interest and all kinds of support. & nbsp; 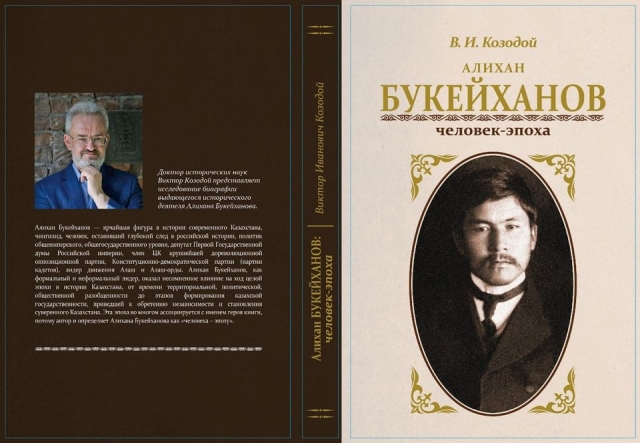 Viktor Kozodoi's book 'Alikhan Bukeikhanov: a man is an era'. Photo from the archives of V. Kozodoy

& ndash; & nbsp; Were the sources of the Kazakhstan archives in Russian?

& ndash; Basically yes, because during the period that I'm interested in I have reviewed documents from state authorities, law enforcement, political organizations, and newspapers. Almost all office work was done in Russian at the time. & Nbsp; There is not a very large layer in the Kazakh language, I had to hire translators. He paid for this work himself. I did not have a scholarship, it was my personal initiative project. The researcher must be free and independent.

& ndash; & nbsp; Perhaps, thanks to the mutual understanding of expert circles in history, literature, art, we will understand each other sooner?

& ndash; Of course, we have a similar mentality, a lot of people from Kazakhstan come to study in Siberian universities. Our Siberians, in turn, left to practice and work in Kazakhstan. So my two sisters left and started families there. I have great respect for the Kazakh people. My book & ndash; a kind of gift to Kazakhstan in honor of the glorious date of the 30th anniversary of independence. The hero of my book made a huge contribution to restoring the traditions of the Kazakh state, which have deep roots. & Nbsp; It was not for nothing that being a 24-year-old boy, he turned to the school administration to change his last name from Nurmukhamedov to Bukeikhanova. Bukeikhan, his great-grandfather & ndash; one of the last elective khans of the khanate of Kazan, and on my hero this tradition has been cut short. Taking the name Bukeikhanov, he himself entrusted the mission of reviving Kazakhstan as an independent state.

Viktor Ivanovich Kozodoy, 59 years old . Originally from the Novosibirsk region. In 2012-2014 was deputy governor of the Novosibirsk region, in 2018-2019 he headed the Institute of History of the Siberian branch of the Russian Academy of Sciences. During the official presentation, Viktor Kozodoy was solemnly awarded the title of Honorary Professor of Alikhan Bokeikhan University of Semey.