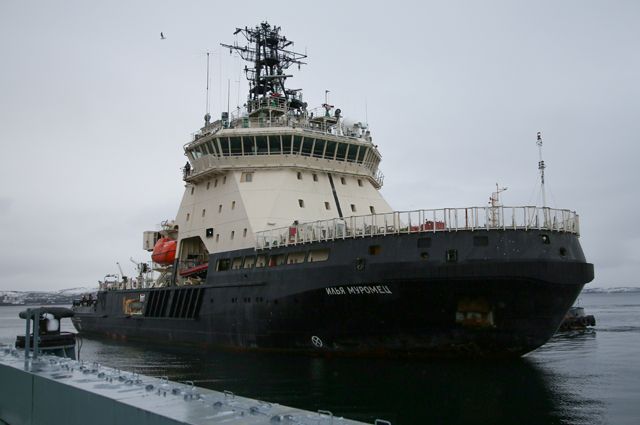 To supply the garrisons in the Far North, it is planned to build five icebreakers and multi-purpose ships. This was reported by the Deputy Chief of the Logistics Staff of the Armed Forces of the Russian Federation Andrey Efimov . Shipbuilding is envisaged by the Russian Auxiliary Fleet Development Program until 2033. & nbsp;

Already next year the icebreaker Evpatiy Kolovrat is expected to join the navy. The ship is built according to the 'lightweight' modernized project 21180 M. Its main difference is the reduced size of the hull and the shallow draft. 'Evpatiy Kolovrat' was set for 2018, and it was originally scheduled to go live in 2021, but these deadlines were not met. & nbsp;

This series of icebreakers will receive the Zaliv-LK-21180 automated control system. The displacement of the icebreaker is just over 4000 tons, length 82, width 19 m. It is capable of breaking ice up to 1.5m thick. The power plant includes four diesel generators with a total capacity of 10,400 kW, the propulsion unit is two rotary rudder propellers with propellers. If necessary, the icebreaker can be equipped with & mdash; anti-aircraft artillery installations. The icebreaker project was developed by KB Vympel, construction is underway at the Admiralty Shipyards in St. Petersburg.

Currently, the Northern fleet includes an icebreaker from the 21180 Ilya Muromets base project, built in 2015-17. The new modernized icebreakers of the 21180 M project are distinguished by their reduced dimensions and draft. This will allow them to be used in shallow water & mdash; estuaries, small bays. The task of the new icebreakers is, in addition to delivering cargo to remote polar bases, patrolling the territory, escorting and towing ships in icy conditions, transporting crews and replacement crews . It is also planned to use these vessels for hydrographic research. & Nbsp;

The construction of five icebreakers and three universal transport vessels will expand the capabilities of the fleet to supply the regions of the Far North. Today, via the Northern Sea Route, ships deliver up to half the cargo for military needs in the Far North. Therefore, in 2017, the diesel-electric icebreaker Ilya Muromets was included in the auxiliary fleet of the Russian Navy. and two Elbrus logistics support ships, which can traverse a layer of ice up to 80 centimeters thick.

In the spring of 2021, at a meeting of the Council of 39; administration of the Russian Geographical Society, Russian President Vladimir Putin said that the most powerful icebreaker fleet in the world is being created in Russia. According to the president, the movement along the Northern Sea Route in the coming years could span the whole year. Earlier, Deputy Prime Minister of the Russian Federation Yuri Trutnev indicated that by 2030 the ice class freight fleet will more than triple by 2030. More than 30 tankers, 40 bulk carriers and 22 container ships will be built.